I missed most of Chanukah this year. I try never to miss Chanukah, or really any of the major Jewish holidays. But this year a colleague invited me to Macedonia to teach at a conference on cyber-evidence and terrorism, as well as to lecture on general cyber-investigations and protecting minority populations. I had to accept. The topics are all within my professional sweet spot, the colleague has helped me through the years, a new destination beckoned, and I would still return home just as my children returned home from college to celebrate the last two nights of Chanukah.

I was sorry to miss lighting the menorah for the first 6 nights. Not just at home with my family, but also at our congregation’s communal Chanukah celebration. When I attended that event last year, I was amazed at all the young families who showed up, how much fun the young children had playing together, and how I could eat an obscene number of latkes without reproach.

The trip to Macedonia was nevertheless worthwhile. I lectured at two law schools; one police academy; a three-day conference of investigators, prosecutors, and judges; and at an American-embassy sponsored event with civilian Macedonians as well. I visited the embassy, where I met the ambassador and enjoyed the embassy’s holiday party. I also enjoyed sight-seeing around Skopje, Macedonia. Skopje is surrounded by picturesque mountains that nestle not only the city, but also a beautiful long, narrow Matka Canyon on the outskirts, which I hiked — mostly alone in nature — the last day of my trip. My hotel was right in the city center, which is decorated with new, impressive statuary, and buildings faced with lit-up Greek-like facades, and impressive footbridges that span a river with several riverbank restaurants shaped like old ships. Adjoining this newer area is a winding bazaar of shops, restaurants, bakeries, and from which, during the right times of day, you can hear broadcast the call to pray at the local mosque.

Also in the city center was Macedonia’s Holocaust museum. This surprised me, because Macedonia is primarily Macedonian Orthodox Christian and Muslim. The Holocaust museum is a special tribute to the Jews who perished there, because, Macedonia claims, its Jews suffered disproportionately more during the Holocaust than did any other country’s Jews, with 98% of Macedonia’s Jews having perished. Unfortunately, the museum was closed to prepare for new exhibits. It was nice, however, to know that the Jews are remembered by a city overseen by the large, lit-up Millennium Cross on a close-by mountaintop and in a country with so few Jews remaining.

I did have a Jewish surprise one evening well into my visit. After work, a group of us Americans explored the old bazaar at some length and encountered a large and very old stone marketplace. People would gather here, tether their horses, get rooms, and sell and buy merchandise. Now it housed, among other things, a restaurant cozy with old timber, stone, and brick. We had a beer before seeking dinner elsewhere, and talked about the past week and what we did back at home. As we got up to leave, I looked in the large window decorated heavily with objects, some seasonal and some not. Here is what I saw: 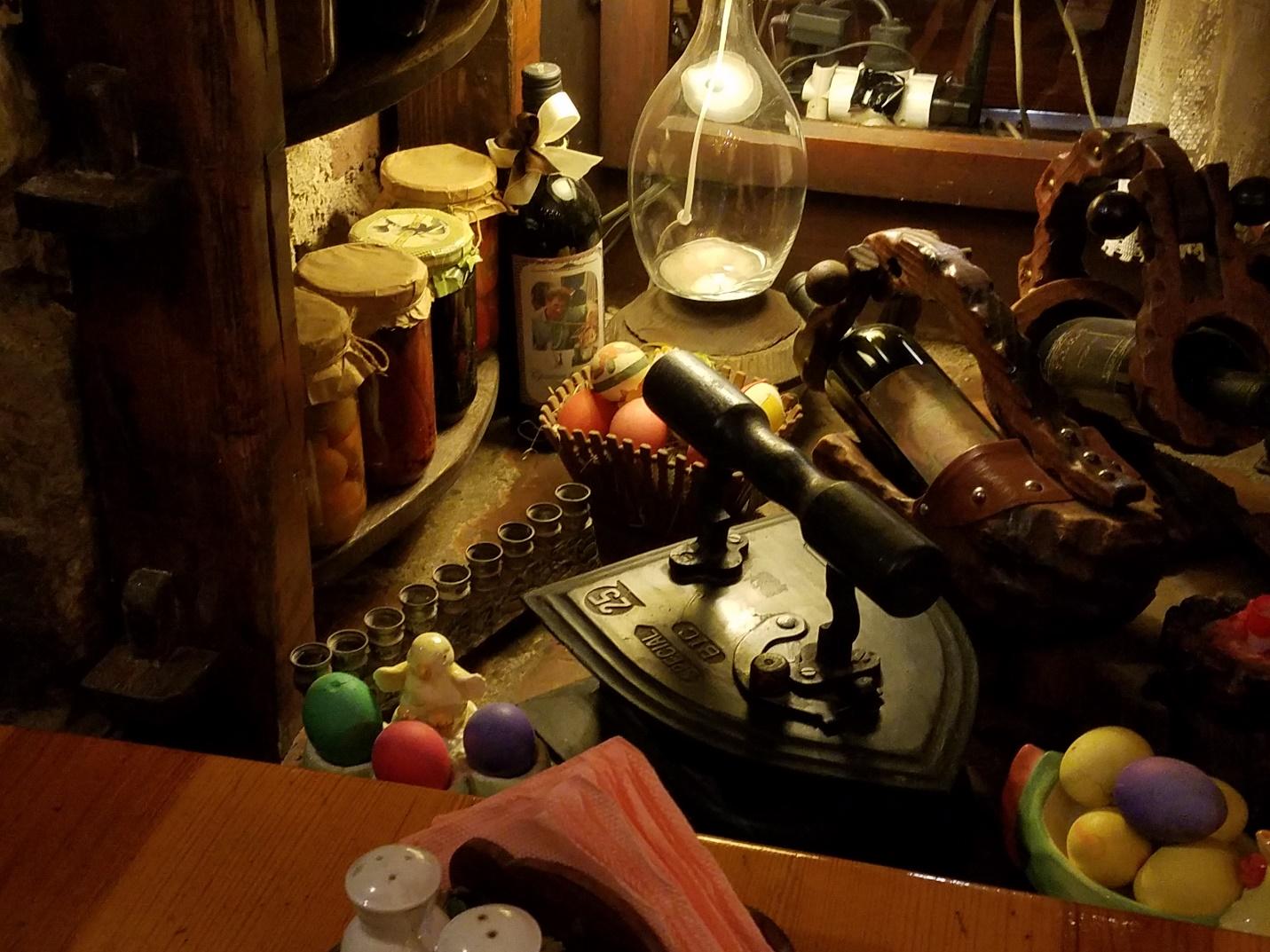 Imagine my surprise. Have you spotted it? Look in the lower left corner, behind the chick and the eggs: what type of candle-holder has space for nine candles, with one holder raised above the others? A Chanukiah. I have no idea whether owners of the restaurant or the decorators of that window know what they have there. Maybe they did, and maybe they didn’t. But it was a welcome sight to me.The trip back was long: over 27 hours of flying. During a very brief stopover, I prowled the early-morning streets of Vienna. Among the many Christmas decorations, I found Vienna’s own large Chanukiah. It was unlit, but again lifted my spirits to see Judaism around the world. 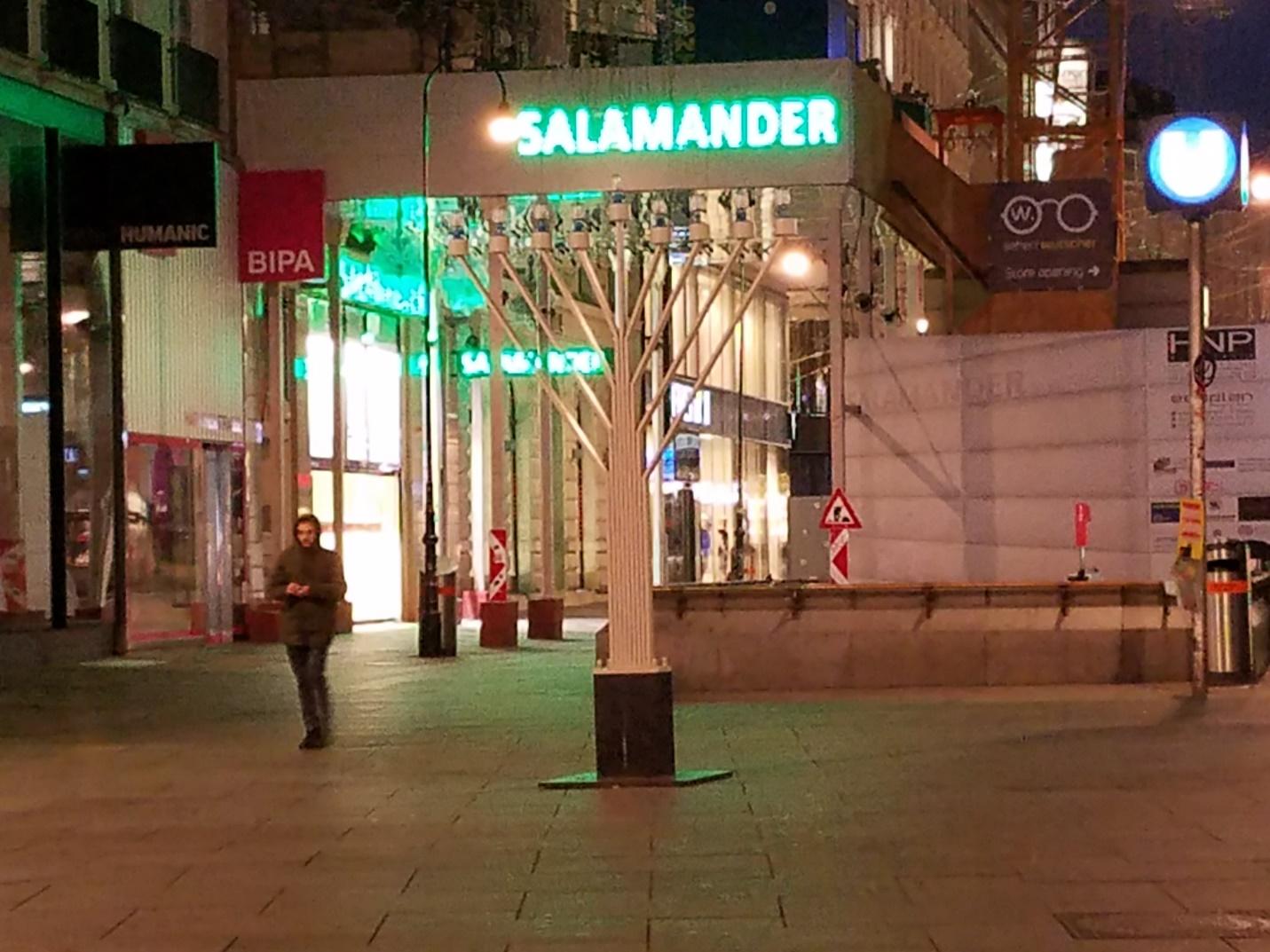 Once finally back home, I got to light my Chanukiah one night with my family, and was glad to be back on the bimah the following Friday.I offer all of this so you know that I missed spending Chanukah with my family and my congregation, I am very glad to be home, and I am also very glad to have seen some remembrances of Judaism and Chanukah in other parts of the world.